Instantly distinguishing New Trafic is a more expressive front-end design, with full-LED headlamps incorporated into the C-shaped lighting signature that represents the identity of the Renault line. A bolder grille, with details such as a new holder for the Renault logo and chrome finishing strip, plus a new ‘Urban grey’ colour complete the revised styling. 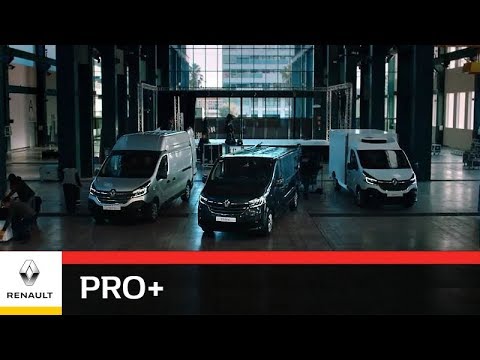 With a class- leading loading length of 4.15 m (using the load- through bulkhead under the passenger bench seat) and an effective load volume of up to 8.6 m3, it can transport all materials, tools and large or cumbersome objects! The large sliding side doors and the rear doors which open up to 255° facilitate access to the loading area. Do you need to take your team with you? The Crew Van version can comfortably seat up to six people. Combine business with pleasure with New Renault TRAFIC.

The cabin is dominated by an updated, car-like dashboard with satin chrome buttons and detailing, which is complemented by a new dark carbon colour scheme. New long-lasting upholstery of greater quality enhances comfort and durability, while all versions also feature a new gear knob design. Connectivity and the office-like feel of the interior are intensified with the availability of new on-board multimedia solutions – the R-LINK Evolution (compatible with Android Auto) and MediaNav Evolution with multitouch screen (compatible with Android Auto and Apple CarPlay). For better telephone call quality, a new microphone has been incorporated into a new single DIN stereo. Naturally, the interior of New Trafic continues to offer one of the best storage capacities in the market with 90 litres, including under passenger seat storage of 54 litres.​

New 2.0-litre, turbocharged dCi engines and the availability of a six-speed EDC (Efficient Dual Clutch) automatic transmission ensure New Trafic is even more suited to the needs of business customers. All engines comply with Euro 6d-TEMP standards and, with a variable geometry turbocharger, achieve greater power outputs spanning from 120 to 170 hp and increased torque of up to 380 Nm. Efficiency is improved too, with the 145 hp version delivering a reduction in fuel consumption of up to 0.6 L/100 km (NEDC back-translated values). All engines are matched to a six-speed manual gearbox as standard, while the 145 and 170 hp versions can also be specified with the new six-speed EDC automatic, which optimises economy and allows smoother, faster gear shifting.

Find out more about the New Renault TRAFIC and the versions available by contacting our Sales Teams in Bedford or Kings Lynn.

Motorvogue (Northampton) Ltd is an Appointed Representative of Automotive Compliance Ltd, who is authorised and regulated by the Financial Conduct Authority (FCA No 497010). Automotive Compliance Ltd’s permissions as a Principal Firm allows Motorvogue (Northampton) Ltd to act as a credit broker, not as a lender, for the introduction to a limited number of lenders and to act as an agent on behalf of the insurer for insurance distribution activities only. We can introduce you to a selected panel of lenders, which includes manufacturer lenders linked directly to the franchises that we represent. An introduction to a lender does not amount to independent financial advice and we act as their agent for this introduction. Our approach is to introduce you first to the manufacturer lender linked directly to the particular franchise you are purchasing your vehicle from, who are usually able to offer the best available package for you, taking into account both interest rates and other contributions. If they are unable to make you an offer of finance, we then seek to introduce you to whichever of the other lenders on our panel is able to make the next best offer of finance for you. Our aim is to secure the best deal you are eligible for from our panel of lenders. Lenders may pay a fixed commission to us for introducing you to them, calculated by reference to the vehicle model or amount you borrow. Different lenders may pay different commissions for such introductions, and manufacturer lenders linked directly to the franchises that we represent may also provide preferential rates to us for the funding of our vehicle stock and also provide financial support for our training and marketing. But any such amounts they and other lenders pay us will not affect the amounts you pay under your finance agreement, all of which are set by the lender concerned. If you ask us what the amount of commission is, we will tell you in good time before the Finance agreement is executed. All finance applications are subject to status, terms and conditions apply, UK residents only, 18’s or over. Guarantees may be required.
Contact Us

Whatever your question or feedback we are here to help. So please feel free to contact us

Sales
Service
Our Locations
Join us on Social

Immerse yourself even deeper. Visit our social channels

Required cookies are essential to let you move around the website and use its features, such as accessing secure areas, shopping baskets and online billing. These cookies allow our website to provide services at your request.

Functionality cookies are used to remember the choices you make, e.g. your user name, log in details and language preferences. They also remember any customisations you make to the website to give you enhanced, more personal features.

Targeting cookies collect information about your browsing habits to deliver adverts which are more relevant to you and your interests. They also measure the effectiveness of advertising campaigns.

This site uses cookies and related technologies for site operation, analytics and third party advertising purposes as described in our Privacy and Data Processing Policy. You may choose to consent to our use of these technologies, or further manage your preferences. To opt-out of sharing with third parties information related to these technologies, select "Manage Settings" or submit a Do Not Sell My Personal Information request.